Another innovation in the development of PE100 is PE100 RD, a polypipe which is resistant to disinfectants which makes it the perfect PE100 pipe for water distribution.

Polyethylene pipes have been used in drinking water distribution networks for over 70 years. PE pipe resins are generally resistant to the low concentrations of chlorine-based disinfectants used to ensure potable water quality and safety standards. However, in certain regions of the world like Southern France and Northern Italy more aggressive disinfectants such as chlorine dioxide have been introduced into water reticulation systems, leading to premature failure of PE pipelines. Similarly, very high concentrations of hypochlorite, in combination with elevated water temperatures, are also thought to shorten the lifetime of PE100 pipes.

PE100 RD is a new resin that has been specifically developed to tolerates aggressive disinfection environments. Its increased resistance compared to regular PE100 has been demonstrated (up to 50-fold) in accelerated aging experiments compared to regular PE100.17 The use of PE100 RD is now specified in regions where chlorine dioxide is routinely added to drinking water. It is also a suitable option for water networks that require high concentrations of disinfectant.

Clearly, it is important to look at context when deciding which PE100 pipe and its variations to go for. The next blog post will look at PE112, a polypipe material which is meant to be one step after PE100.

Until then, why not dig in to some of our case Studies

We're not around right now. But you can send us an email and we'll get back to you, asap. 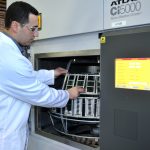 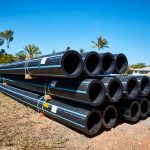